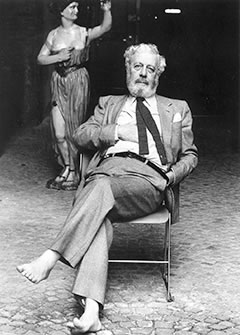 A VIRTUAL MUSEUM FOR BERLANGA

In the last two decades, the expansion of the Internet and of the Information and Communication Technologies has brought about dramatic changes in the way we approach the audiovisual industry and it has favoured the appearance of other means of broadcasting parallel to conventional screens and the channels known until now for the cinema and the television.

The so-called digital culture, which establishes itself fundamentally around the Internet, has also contributed to redefining the traditional idea of a museum as a real physical space or as a container of scientific, cultural or historical objects. In this new definition of museum, the concept of virtual museum stands out. The main feature of this concept is a wider and more universal dimension, because geographic borders and cultural barriers are eliminated and infinite options for access, the promotion and the spreading of museistic contents are open.

All these transformations, which are bringing about a real technological revolution, encourage us to make an effort to innovate constantly and find new proposals for cultural information and audiovisual consumption.

The project of creating an on-line virtual museum about the life and work of Luis García Berlanga answers precisely the need to attend to the demands of this technological revolution and to integrate the Valencian film maker into the digital culture of the 21st century. In this context, the Berlanga Film Museum (BFM) is set up with the idea that all of Luis García Berlanga’s films, literary and cultural works, as well as the lesser known aspects of his biography and the theoretical and critical reflections that his film work has generated can now be consulted on-line by both critics and historians, and also by anyone who may be interested in knowing the Valencian film maker better. As a documentation centre, the Berlanga Film Museum aspires to be an international reference database about the Valencian film director, so that it can be consulted by film researchers and historians, as well as film lovers.

The Berlanga Film Museum is, in many aspects, a pioneering project because until now there has not existed an on-line museum exclusively dedicated to the figure of a film maker in Europe. In addition to the data and information offered by pages from cultural institutions, film institutions and main international film databases (IMDB, Film Affinity, All Movie Guide, Movie Review), you can find some monographic web sites about some film makers, which have been created by cultural associations, fan clubs, relatives or foundations related to great film masters. Despite its undoubtable interest and usefulness, existing web sites about film makers have not been thought out as a virtual museum, whose purpose is to include all types of information, documents, images and film and sound so rigorously and exhaustively.

Among the topics about the figure of Berlanga there is the fact of him not being a film maker who was really well-known beyond our borders and that his films are difficult to understand for many foreigners. These topics can be easily qualified, if one remembers his continuous participation, the tributes, the retrospectives and the awards obtained by the Valencian film maker, not only in the main film events (Placido’s Oscar nomination) and international festivals (Cannes, Berlin, Venice, Montreal, Karlovy Vary), but also in film archives and cultural institutions from all over the world. In any case, the Berlanga Film Museum project has also been created to be the main international platform to promote and spread Berlanga’s life and work in order to keep his figure alive in the 21st century and the place of pre-eminence he has had in the history of European cinema, together with other film makers of his time such as Ingmar Bergman, Federico Fellini, Alain Resnais, Manoel de Oliveira, Vittorio De Sica or other directors from Italian neo-realism and the subsequent Nouvelle Vague.

Luis García Berlanga’s biography (his Valencian roots, his family and his wide network of friends and professional relationships) is useful in understanding his films and his contribution to the Spanish culture of the 20th century better. In the Berlanga Film Museum project there are also included all those written documents, testimonies, photographs, videos and sound files that enable us to get a wider vision of what his life and his time were like.

The Berlanga Film Museum has been set in motion, but this project is not closed to incorporating new materials about the Valencian film director. In fact, the idea is to complete and update this virtual museum with any additional pieces of information about his life and work that may surface in the future. In that sense, the Berlanga Film Museum intends to be a live and dynamic project, a permanently ongoing project.

At a time when both the audiovisual sector and all fields of culture are undergoing deep transformations, the Berlanga Film Museum project is even more necessary to make Berlanga’s films known among the new generations born in the era of the Internet, but also to keep his enormous cultural legacy alive, and also the memory of his fascinating and complex personality.