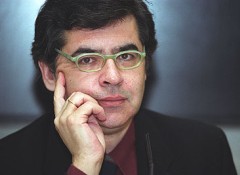 ABOUT FREEDOM, THE INDIVIDUAL AND PASSIONS

Anyone may have a personal relationship with a great film maker if they watch, appreciate and study his/her films. This is what happened to me with Luis García Berlanga during my teenage years.

However, that relationship became closer and more fruitful from 1980, when, together with the also critic Juan Hernández-Les, I had several interviews with the director, for months, for a book we later published, “El último austro-húngaro. Conversaciones con Berlanga” (“The Last Austro-Hungarian. Conversations with Berlanga”) (Anagrama, 1981).

A friendship was born there, a relatively frequent contact which lasted for three decades, with its ups and downs, and which had another culminating phase when, in the 90s, and with Berlanga’s consent, the producer Andrés Vicente Gómez asked me to write the final version of the script of what was going to be, and never happened for financial reasons and other reasons, the fourth film about the Marquess of Leguineche and the “national saga”, which I called “¡Viva Rusia!” (“Long live Russia!”), with his consent.

Having said that, I will now state, briefly and schematically, some ideas and proposals from Luis Berlanga which have made me think over time.

– The visceral bet for freedom. Whether it is possible or not, whether we have freedom or not, the best thing we have is the opportunity to fight to keep our personal freedom going, to live free. Our opponent, if we have any, is anyone who tries to tie us down or who does tie us down.

– Whatever our commitment to others, to the collective, may be, we are the important thing, as individuals, and therefore, we must boost our individuality and try and satisfy it without hurting anyone.

– It is essential to carry on and to fulfil our own passions. Our passions are the most intimate and personal thing we have. It is important to see to them with the best criteria we may have.

– These passions, which Luis Berlanga sometimes placed in “our guts”, are not necessarily “blind”, as some people automatically describe them, but they provide ideas and point at solutions and paths to follow. Guts can think too.

– Human beings are able to have noble and grand attitudes, but the human condition is not exempt from numerous miseries. We must not deny them. We must accept our miseries and understand those of others. We cannot be Manichaean. Except for the case of some obviously evil people, human miseries are behind many types of behaviour. Whether they justify a specific action or not, we must understand them as “reasonable”.

– Life is definitely not a paradise. The diagnostic we may reach of individuals and of society may be pessimistic. But if we want to avoid being overwhelmed by that pessimism, we must have wishes and pursue them. A hedonistic position, in favour of pleasure, helps us to survive and the fruits obtained from it compensate us for our hopelessness, unease, injustice and other misfortunes.

(*) Manuel Hidalgo (Pamplona, 1953) is a journalist, a film critic, a novelist and a screenwriter.