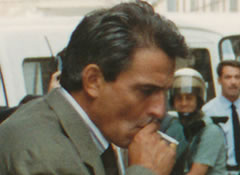 Writing about somebody who could overshadow, through image only, not just words forbidden by censorship, but also facts that no other film maker ever knew how to portray with such accuracy, is risky but desirable. I myself, like so many others, learnt a lot from Luis.

I only worked with him three times. He called me many other times, but I was involved in other projects and I couldn’t take part in his, although we never grew apart because of that. I met him at the beginning of my career and ever since then I was captivated by his genius and his personality.

Even then, I already guessed that it would be impossible for any one of his followers to take his place when he left us. It is still too soon to confirm my thoughts, but the wake Luis left in the film industry and the emptiness his absence leaves for those of us who started when he was at his highest, will always be an emptiness that will accompany us till the end, like we accompanied him. Berlanga is the master of masters and the promoter of free-will in the Spanish cinema of all times.

Until we run into you in that Ciudad de la Luz (a Film Studio he helped to build in Alicante) where you will be waiting for us and which, I’m sure, will be more just with you than the one you left behind in this world.