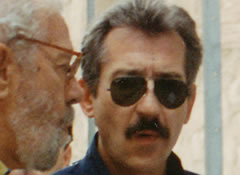 LUIS LOOK WAS AS WIDE AS IT WAS ACCURATE

What else can I add to everything that has already been written and said about Luis García Berlanga?

I can do little more than leave my statement of admiration and respect for a person with whom I was lucky enough to work and share opinions and views.

Luis García Berlanga is not only one of the greatest in the history of cinema in the world, but he is also an essential figure to learn about the culture of our time. Like Picasso, like Galdós, like Falla, like Ortega…

Luis’s look was as wide as it was accurate, as deep as immediate in its clarity, as critical as always –or almost always-, ready to show piety.

Without rhetoric, without pontificating, his characters have always taken us by the hand –sometimes by the ear, to face a mirror in which, half laughing, half fearing, we end up seeing ourselves.

Personally, Luis was intelligence in its pure chemical state. Before him, as before the also friend and master Fernando Fernán-Gómez, there was no room for the imposture, the arrogance, the false modesty, or the impatience of the bad apprentice… One felt better in their presence. One felt the need to be better.