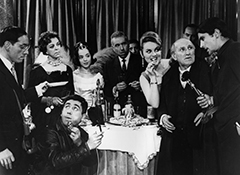 “Plácido” is the best film in the history of the Spanish film industry.

“Plácido” is the best film in the history of film.

It is cruel, tender, and funny. It was shot with pinpoint accuracy, with the best shots, as I said, in the history of cinema, but without exaggerating the style. They last as long as they need to last.

It is the first film by Berlanga, which the critics/priests didn’t dare introduce to the Christian cinema circuit. Despite being a “sainete” (a comedy sketch), which doesn’t deny its popular roots, it doesn’t hide behind any Christian message or any other dogma. It’s not Kempis that’s inside “Plácido”, but Kafka. They are two very different K’s.

Besides, it is a very well produced film. The photography is admirable. The poor look poor.

It isn’t grandiloquent, despite being a portrayal of a time made with a ferocity worthy of the best writer in the world.

“Plácido” is the best film by Luis García Berlanga, because almost all his actors take part in it, all with original denomination labels (guarantee of origin and quality), from Ciges to Lepe.

“Plácido” is the best film in the history of Spanish filming because the poor are the victims and the rite of Christmas goes to hell. Because it has the wonderful good taste of not overdoing things…

Because Cassen is in it, because there is a three-wheeled van and a Christmas hamper. Because everything exudes truth. Because the radio is as it was, and the affected ladies are affected, and the poor are not poetic, they are pathetic.

“Plácido” is the best film in the history of filming, like Cocinex pressure cookers.

Besides, it doesn’t have a happy ending. What else could we ask for?

I know this is an exaggeration. However, it is not criticism, but an exaltation of a friend and masterful teacher, and since I’m only going to do it this once, I might as well get carried away. Berlanga was better than Lubitsch and Chaplin together… there.