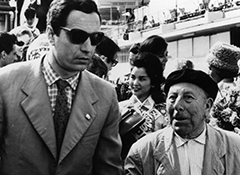 I’ve known various Luis Berlangas. I first met him through his films, which as a teenage film fan, helped me finally decide to take the path of film production to develop my professional career. I thought “¡Bienvenido, Mister Marshall!”, “Plácido” or “El verdugo”, among others, were magnificent when they were released, and the strange thing is that, when I see them again today, as happens with all masterpieces in film, literature or painting, they still awake the same feelings in me.

It is unbelievable that, when everything around us has changed so much in two and a half generations, Luis’s films retain the originality of their release. I’m sure that most of them will maintain their originality for future generations and will be one of the best graphic documents to help understand what Spain was like during the decades Berlanga worked as writer/director, since I know out of experience how much of his talent is thrown into his collaborations with other screenwriters such as Azcona.

I won’t analyze his talent because there are specialists in his cinema who have talked and written about it with texts infinitely better than anything I might write. It would be too obvious to repeat that behind the humour and caricature there is a harsh criticism towards a lot of aspects of those difficult times –like Cervantes, Quevedo, Voltaire in “Candide”, and a long etcetera which goes back to the Greek-. His films are the best testimony that the most effective criticism, and that which lasts longer, is the one presented wrapped up in a layer of humour.

But behind that criticism there is always the great tenderness with which Luis treats his characters. Just like any other humanist, Berlanga is understanding with the countless flaws in the human personality, and when he mocks them he is somehow putting a mirror in front of us so that we can recognize our own mistakes.

As Alfredo Matas’s business partner, I met the second Berlanga months before shooting “La escopeta nacional”. Meeting someone you have admired for years is always a strange experience. Sometimes it is disappointing, sometimes you have a pleasant surprise. In this case, I was surprised by his apparently carefree approach to work during the writing of the script and the shooting, to discover later that behind that apparent calm there was a brilliant professionalism that was reflected on a million details and on the sequence shots, that look so natural and simple to the viewer but need an absolute control of filming techniques.

Having a conversation with Luis meant enjoying his incisive imagination, his sense of humour, sometimes caustic and sardonic, never cynical: The sense of humour of a true philosopher who doesn’t take himself, or the world around him, too seriously, but who always has an original comment, his own way to see something that teaches us to look at things in a different way. Getting to know him meant admiring him even more.

My third Berlanga is the promoter of ideas Berlanga. During more than three decades I had the honour, together with Alfredo Matas, to take part in the project to create a film Studio which would replace all the film studios which attracted the great international film productions to come and shoot in Spain in about the middle of last century. After those studios disappeared, Luis wanted to promote the construction of a modern Studio which made the country be the neuralgic centre of international audiovisual production once more. Finally, there was an offer from the Comunidad Valenciana (Valencian regional government) and the Ciudad de la Luz was built. At present, it is one of the better-equipped modern studios in the world.

Apart from the cultural aspect of cinema, Berlanga always defended that the cinema was an industry and it needed institutional support to have a prominent place in a country which has a wide variety of landscapes and an ideal climate to shoot on location.

Something that shows Berlanga’s generosity is the fact that he used his prestige -because without his insistence the project would have never seen the light- not to add glory to his name -he had already achieved more than enough of that-, but to take a great step towards reinforcing the film industry in Spain. His greatest dream was the School, which he insisted should be part of the Studio complex. A school where all the trades related to audiovisual production and post-production would be taught. A school that, in few years, would train a generation of first-class technicians, ready to integrate in the avant-garde of their profession. It was the essential complement for a studio like the one built in Alicante.

Luis Berlanga was a forerunner in many aspects. A few weeks ago there was a feature on French television about the business of rubber dolls and the psychological profile of men who are addicted to them. It will soon be forty years since Berlanga dealt in his own way with this problem in his film “Tamaño natural”. This is the same in many of his other films. Not only are his works still as original, but they were ahead of their time, dealing with topics that nobody had yet dealt with at the time and that are still being explored many years later.

Luis Berlanga, apart from an undeniable master for many generations of cinema fans and professionals, was for those of us who were lucky enough to be close to him, a human being difficult to copy.