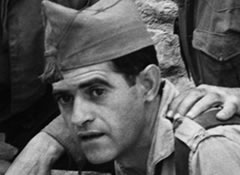 WORKING WITH HIM WAS NOT ONLY BEARABLE, IT WAS SIMPLY INCOMPARABLE

Is it bearable? This is a question Luis used to ask us when we rehearsed a sequence which required a certain amount of physical effort. Working with him was not only bearable, it was simply incomparable.

I met Berlanga thanks to Alfredo Matas, with whom I had worked before in “El crimen de Cuenca” (The Cuenca Crime). And it must be because of my interpretation in that film that he may have talked to him about me playing one of the protagonists of “La Vaquilla”. Alfredo Matas, a wonderful person and a very important producer in Berlanga’s filming career, with a crew led by José Manuel Miguel Herrero and Marisol Carnicero. I think Luis really missed them in his last films.

During the shootings Berlanga was strict, demanding, thorough, funny, with a certain Mediterranean sarcasm, always loving and with an excessive theatrical talent.

I really enjoyed the preparation and rehearsal of those unique sequence shots, “He always knew exactly what he wanted!” Berlanga was the type of director who always came with “his homework done”.

Now that I can’t enjoy his art and that of his inseparable Rafael Azcona any more, I have noticed that the powerful bankers, priests, military men, authorities, in short, the powers that be, breathe relieved to know that now they won’t be represented with such precision, knowledge, good taste, intelligence and humour.

I have been so lucky and I have learnt so much from this world master! Besides, we shared the same home region, because I was born in Castellón, and the constant presence, both in his work and in his life, of those memories from my childhood in Benicàssim, Hotel Voramar, Oropesa, Peñíscola.

Luis, thank you for existing!