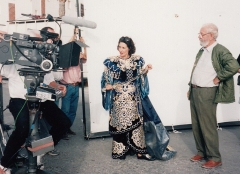 YOUR MONSTER DRESSED IN FUCHSIA

My friend, Margarita Lozano, told me Berlanga needed a young girl for his film “Esa pareja feliz”, so I went to see him. I went to The Moncloa, where they were filming on location and, well, he didn’t even look at me. He had an obsession for Italian women. After all these years his cinema still shook me, won my heart and fascinated me. I saw him from far away each time he received an award. I watched his films over and over again. “Plácido”, “El verdugo”, “Bienvenido, Mr. Marshall”, of course, “Los jueves, milagro”, my favourite, “Calabuch”, another favourite, although he didn’t like it… “La vaquilla”, copied several times by the Americans, “La escopeta nacional”…

Anyway, I became a friend of the family and I found a dear friend in his wife, María Jesús. Being Maestro Berlanga’s wife is very difficult. So, thanks to her I even managed to make Berlanga come to see me at the theatre. But he still wouldn’t give me a role to work with him. He used to say things like: “You are not enough of a monster to work in my films”, and I wondered: “What can he mean, that I’m not a good actress, that I’m not ugly? Because Mónica Randall is very pretty, Amparo Soler Leal is a very good actress… What’s his problem with me?”.

Well, if the mountain will not come to Mohammed, Mohammed must go to the mountain. And then there’s “París-Tombuctú”… I see him having lunch with Jordi García Candau in the restaurant Currito at the Casa de Campo in Madrid. I go up to his table and say to him: “I have to work in this film, I don’t care what role you give me, as a cleaning lady, an apprentice…” and he says he has been negotiating with an Italian actress, Stefania Sandrelli. And I say: “Well, she’s not a monster”, and he answers: “No, she isn’t, but she is prettier than you”. Then, I go back to María Jesús and she says to me: “Do you know how you can win his heart, which you have almost won already? In the upcoming screen tests he is going to do in Cornejo make sure everything you wear is fuchsia”.

And that’s how I turn up in Cornejo, even my knickers are fuchsia. Anyway, I worked in “Paris-Timbuktu” and it was an unforgettable experience where I learned about the talent the master had to make sure he never neglected his actors in those long and wonderful sequence shots, while we had some rice in that microclimate, as he called it, in his beloved Valencian region.

Dear Luis, wherever you may be, thank you for giving me the opportunity to close your filming career in such an excellent manner and here you have, and will always have, your monster dressed in fuchsia.