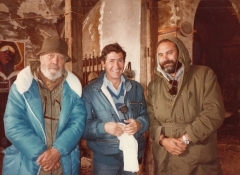 He had strawberry trees in the garden and I kept saying I could make an exquisite liqueur with their fruits. The agreement was that we would share half the bottles each, and we were thrilled although the resulting liquid looked suspiciously cloudy and when it fermented it soon gave off a horrible foul-smelling stench and right now I can’t remember anyone who took a sip and didn’t spit it out immediately after, a liquid which had achieved its objective, which was helping us have good times, like two boys with a game of Cheminova (a chemistry game from the eighties), and, besides, we used to go up a tower he had in the garden and have a chat, but we never talked about the films we had made or the ones we were going to make as stated in sequence 02/.

It was a trip to find a location and in the evening we were in a pool hall, a French one of course, because we both boasted we were better players than the other, although we were both very bad compared to the master Manolito Alexandre, who could play very well. Luis used to say something he really liked: “So much effect, so little ball, tighten your butt and cannon the ball” and I insisted that the last cannon shot was called “la pocha” and the last but one “la prima” and he said I had made it all up, and then we talked about farting, and we agreed that the silent fart was the most dreadful one, but, that night, when we finished our game, it was the only time, in the ten years we worked together, that we talked about work, but there was no indication from him or inquiry from me, and we agreed that that was because we had an agreement from Day One which meant I could not show off with light, but together we would film wonderful endless shots which didn’t allow me any room to place the projector in fairly coherent places, and that system was, in short, the best we could do for each other.

We would sit behind the camera skilfully operated by Alfredo Mayo and wait for one of the actors to make a mistake to laugh. At first we laughed quietly until a guffaw came out and the sound engineer would get annoyed and also the cameraman because when he heard us behind him trying to suppress our laugh, he caught on and the camera shook, so, since that happened everyday, we had to leave the set and move to a little room next to it to follow the shooting through one of the first screens that were then starting to become fashionable, and that allowed us to have a good laugh and now, while I’m writing I can’t remember Luis annoyed or angry, I only remember him laughing at everything, at himself, and I remember he also laughed at death in all his films.

Now I don’t laugh very often, I often think about him, not because he still owes me a few dollars (he promised a dollar to every member of the crew for each idea or remark used in his films) but because we had a very good time together, once I overcame the panic of working with the greatest, and I’m sorry he died with the wrong idea, boasting that he was a vampire director who sucked the talent of technicians and actors, when it was the other way round and we were the ones who fed on him and today, in his memory, and risking the respiratory collapse of anyone kind enough to read these lines, I have organised this tribute in sequence sentences, without full stops, and now I have to go because the marching band is coming and they are giving out oranges, so I don’t want to miss it.