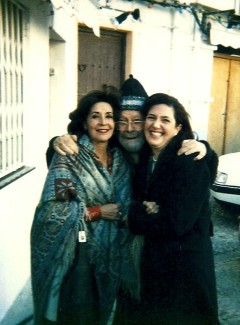 Luis García Berlanga was a fascinating person. Bardem defined him as “a negative braggart” because he always boasted about the worst of himself and his natural pessimism. He used to enjoy telling that he had never managed to learn how a camera worked, that the actors were free and he let them improvise, that, in his first films, the most experienced technicians ignored him … in short, as if he It was a big disaster and not the immense director and scriptwriter that it really was. When he started making films, every time he had just shot a shot he used to say “go shit,” even though the rest of the team would have been delighted with the result. Hence, one of his biographies is entitled “Welcome Mister Cagada”.

Luis was so big that his name is used as an adjective. Plasmed like no one those situations a little surreal but full of black humor that, since then, we qualify as “berlanguianas”. That was funny: to see in a newspaper that something was “Berlanguian” or that some journalist defined some situation as a new “Welcome Mister Marshall.” But the most curious thing is that he told us that many of these absurd situations, incredible, hilarious, that he reflected in his films, were taken from a brief in a newspaper, from a real anecdote, and that what he wanted was for his films to be a piece of life And wow he got it. Anyway, as I said before, he always took off merits instead of putting them on because, real as many of those anecdotes were, he transformed them by looking at them through his very personal prism.

For years and years Luis was a luxury contributor to some of the programs I did on the radio. In the dedication of his memoirs he wrote to me “in this book there are many pages of sadomasochist, it is for me a satisfaction this dedication to Beatriz, who has been the one who has tortured me the most, but unfortunately not with a whip, but with the microphone. With a kiss from your slave. ” For years he was coming to the radio. Never failed, never arrived late, always protesting, yes, but always compliant. It was considered a disaster talking on the radio but it was wonderful because their opinions were always different from the rest of the world, interesting, intelligent, fun and, above all, free. I have not met any other person who said what he thought without caring about the consequences. He did not have prejudices or ignore the “politically correct”, a tendency that we both deeply hated. You could agree or disagree with him but his opinion always introduced something new and interesting and never complacent. A joy now that no one is arguing to learn or change their minds, but to sink even more into their own opinions. His films are a sample of his original way of thinking. Who else if he can think of making a death penalty attack with a story like “The Executioner”?

Luis García Berlanga was also an absolute chaos. He always said that he suffered from verbiage and on the radio he always asked me to cut him, but the truth is that it was his way of speaking, also of working. When he wrote his scripts with Rafael Azcona, they would go to a café and there they would talk to each other and one thing would lead to the other and, in the end, a great movie would emerge, films full of acidity and, at the same time, of tenderness. “Everything negative, the bitter and pessimistic of my films is born of me,” he commented in his memoirs. What is certain is that it gave him a less black shape than Rafael (Azcona). I love my characters, I love them despite their blunders. When I often end up abandoning them to their bleak destiny, they give me a certain sorrow. They are my putative children and, although I will not save them, I give them a candy to make the climb to the scaffold more bearable. I do not think that is ternourism. It is even more atrocious. ” Luis was interested in the losers and looking for the most miserable side of our existence. If you congratulated him for being the Honor President of the Academy, he answered that it was the worst because, in the Goyas, you had to receive the authorities at the cold dead door, then you were expected to make a good speech, something that he hated, you had to attend the most absurd and boring commitments instead of being at home watching Valencia play, and on top of that it was an honorific charge, that is, he did not charge. Of course, with these explanations, all the glamor disappeared. Who can give a more subversive version of a charge?

Luis was a freethinker and a libertarian. I think he was one of the most critical and lucid people I have ever met, but since he could not be labeled, many criticized him from an ideological point of view. He recognized that he had been called a gentleman because he was always well dressed, that “they called me a fascist because I was not a communist, a communist because I was not a fascist, escapist because I do not believe in doctrinal banter. For me to take sides, he said, is to renounce freedom. ”

I only have good things to say about Luis. He was affectionate, funny… at home they eat some fantastic rice. Going out or traveling with him was quite an experience, almost like one of his films. I remember once, in Valencia. We went to do a live program and in the evening he took us to dinner, to the whole team, to a restaurant specializing in mushrooms. He told us it was fantastic. We went in, everybody knew him and greeted him. The owner approaches and asks for an assortment of mushrooms for us and for him… a fish. “I do not trust mushrooms,” he said, “but you can eat them if you dare.” And he was perfectly calm.